Difference between revisions of "Shambler" 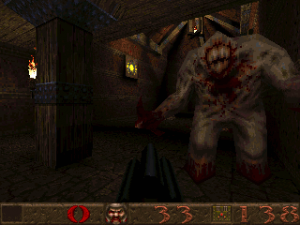 A Shambler in e4m4 (The Palace of Hate).

Shamblers are truly a force to be feared. They have an immense amount of health, and take only half damage from explosions. His pride and joy is his lightning attack, and for good reason: it never misses! Unless you can duck behind cover or retreat beyond the range of the attack, you'll be hit for considerable damage. However, the Shambler's weakness could be his proclivity to use his bare hands when he can. As long as you're within melee range, he will eschew his ranged attack for a good claw swipe or two. So if cover is not available or you're feeling particularly daring, you can run up and initiate his melee attack, then quickly step back to fire shots at him while he is swinging his arms through the air in which you stood a moment before. Then, run back forward before he begins another attack, or he will choose the lightning bolt. Repeat until one of you is dead.

The Shambler only takes half the damage of explosive weapons (Grenade Launcher, Rocket Launcher).

monster_shambler is the entity for placing Shamblers in a level.