Difference between revisions of "Start"

Start marks the beginning of Quake, it is the first level in a single player game, and the default map for the multiplayer as well. It opens with the Quake moniker bearing down over the player and is characterized by the three hallways the player can take to choose their difficulty setting, a unique feature of Quake, where other titles typically go for menu level options for difficulty. After the difficulty selection you have the episode selection, with each episode hall reflecting an aspect of the episode itself.

The skill selection is from left to right, Easy, Normal, and Hard. Easy is characterized by blue water, a flat floor, and the only detail being a stained glass window. Normal however is over muddy water, with a sloping floor, and gargoyle textures creating a more imposing atmosphere. Hard requires the player to jump across broken ground over lava, while crucified zombies hang amidst spikes above; this scenario can actually prove deadly, as not only can you fall into the lava, but a lavaball periodically leaps up and may catch you, knocking you into the lava. Yes, you can die while selecting the difficulty in Quake. Each skill hallway messages via a trigger_multiple "This hallway selects" difficulty "skill.", and the framework of the teleporter at the end also bears the name of the difficulty. 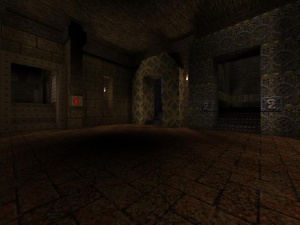 Each episode has its own hallway, each with a slipgate at the end, and they are ordered from left to right. The individual episode hallways message the player with the name of the episode, and a brief summary of it, such as "Your worst nightmares come true", and the geometry and textures help emphasize this.

Decorated in a base theme, and the shortest hallway, it leads to a slipgate which takes you to e1m1, the beginning of the shareware episode. It is the only hallway that does not have a moving barrier, based upon registration restrictions. This episode contains the rune of earth magic.

Decorated in an azure medieval theme, the player must pass through double doors with dragon carvings, which require the game be registered to open, allowing access to e2m1. This episode contains the rune of black magic.

Decorated in a metal bolts and shingles theme, the player walks over an almost lattice work styled bridge, over lava while lavaballs arc up almost touching the exposed sky. At the end of the hallway is a series of metal bars which open for the registered player, granting access to e3m1. This episode contains the rune of hell magic.

Decorated in old carved stone, wooden beams and rusted metal, the player steps into a pool which has a surface bottom as well, as the player drops down into a pit, usually taking falling damage. He may then proceed forward to a staircase, adorned with crucified zombies, though access is blocked by large metal bars which raise vertically depending on registration status. The slipgate at the peak leads to e4m1. If the player wishes to return to the episode selection hall, they may backtrack to find a teleporter to that location. This episode contains the rune of elder magic.

Start is a unique map in that it has two start locations for singleplayer, and it performs an inventory check on load. If the player has any runes, they start in the episode selection area, and the episode where they acquired the runes is now blocked off by a runic tablet. Once they have all four runes, when they return to start, they will find the central floor has opened up to reveal stone steps leading down into a torch lit cavern, and a drop into a slipgate to end (Shub-Niggurath's Pit), with a message of "Shub-Niggurath awaits you..." 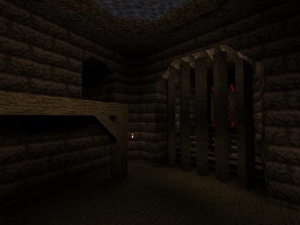 The episode 4 selection area with the bars closed, and a glimpse of the Nightmare skill hall. Note the suspended pool of water.

There is an unofficial secret in start in the form of the Nightmare skill. This can be reached in the Episode 4 hallway. When you step into the water pool, swim back until you're up against the wall, when you fall through the bottom surface, you will land on a wooden beam which wraps around three fourths of the room. Follow it to the left into a tunnel. You will see a texture of the skins of faces stretched over a flame, shoot it for a cryptic message regarding the Well of Wishes. At the end of the hallway which turns to the left you will find a teleporter with a lava texture, which will select Nightmare difficulty.

Multiplayer on Introduction is unique in the separation of items, so as to keep any one place from being mildly sufficient, but rather making each place excel at one thing. First off, aside from the megahealth, all health pickups are located in the skill selection, along with the nailgun. All other weapons are found in the episode selections, with episode 1 containing the super shotgun, episode 2 has the grenade launcher, some ammo and a yellow armor, episode 3 has both a rocket launcher and lightning gun with ammo, but no armor, and episode 4 has the super nail gun, red armor, and the nightmare skill select takes you to the (sealed off) cave to Shub-Niggurath's Pit, where you can find a quad damage and megahealth, and a teleporter back to the skill select. This manages to create a fair amount of flow through for what would be an otherwise dead ending multiplayer map. All exits are blocked off with risers, that can be jumped over, but is sufficient to prevent accidental exiting.