Difference between revisions of "Textures" 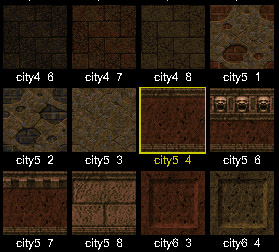 Some of Quake's Textures

Textures in Quake are 256 color images used in Quake maps. Each texture has a name of no more than 15 characters. Their dimensions are required to be a power of 2 in most OpenGL engines, commonly 64x64 or 128x128. Textures are stored directly within .bsp files when used by Quake, or extracted, collected, and used in .wad files by level designers.

To edit .wad files, extract textures from .bsp or convert images use TexMex

There are several special textures in Quake, which have properties defined either by the QBSP compiler or by the game engine.

Clip is a special texture, named "clip", which is invisible, yet blocks player and monster movement. Brushes must be fully textured with clip, and clip brushes do not seal the world from leaks. Clip does not block weapon fire. Clip is commonly used to prevent the player from getting stuck on architectural details.

Liquids are textures whose name is proceeded by the character "*". By default, this means they are water in Quake and you may swim in them. All faces of a brush must be of a single type of liquid texture, and they may not touch Sky textures. Their surface will also animate, and if compiled with the option "-transwater" will be translucent and not block Vis.

A liquid with a name which starts with "*slime" will be damaging slime, and a liquid with a name starting with "*lava" will be even deadlier lava. When compiled by vis, liquids will play an automatic ambient sound. Beware that most versions of vis won't create sound for water liquids which do not begin with the name "*water" or "*04water". Some modern vis programs allow you to turn off the creation of automatic ambient sounds.

Skies are textures whose name which start with the word "sky", and must be of dimensions 256x128. The texture is treated like two 128x128 textures, the right section used as a backdrop, and the left section used as an overlay with its black pixels transparent. Skies are displayed animated and full-bright, block player and monster movement, and 'swallow' weapon fire. Sky brushes do seal the world from leaks.

Simple animated textures with up to 10 frames can be used in Quake. Their name must begin with the character "+" and a number between 0-9. Quake will display a sequence beginning at "+0", "+1", etc, up to the highest number, and then loop back to "+0".

Animated textures may also switch to an alternate sequence if applied to some brush entities, such as func_wall, and func_button (doesn't work on func_door). When one of these entities is textured with an animated texture and is triggered, it will switch to an alternate sequence if it exists. These must be named the same as the original animated textures, except use "+a", "+b", up to "+j". You are not limited by the number of frames in the original animation, but you must begin at "+a".

An example of this is the button texture used in the base maps of Quake. "+0basebtn" and "+1basebtn" blink a red texture, and when the func_button is used, it swaps to "+abasebtn".

Skip is a nonstandard special texture, used by modern QBSP compilers, but does not have any function in the stock Quake compilers as released by id Software. Skip is a texture much like clip in that it is invisible, but skip's use is to remove an entire face from ever rendering, and a brush does not have to be fully textured in skip. The removed face remains solid and will block player and monster movement, as well as block weapon fire. In general, this is of little use on solid geometry, as Quake performs backside culling, but can be used on brush entities or "hacks" like windows to hide unwanted faces. A "*waterskip" texture exists as well, for use with liquid brushes.

Fence textures are nonstandard special textures handled by the modern ericw-tools QBSP compiler and properly supported in some of the current quake engine ports. As the name implies these textures have parts that are alpha-masked so you can see through them like a fence. You can use these textures to make spider webs, vines, bushes, icicles, trees, etc.

The secret to these is the 1st character in the name needs to be, "{", any part of the texture you wish not to be rendered is using the color index #255 (the pink one in the lower right-hand corner) of the Quake palette. To make them show in your maps ran with supported engines you need to make them as a func_detail or one of its variants: func_detail_illusionary, func_detail_wall, or func_detail_fence.

(much of this article was rewritten from http://www.celephais.net/stuff/texturefaq.htm)