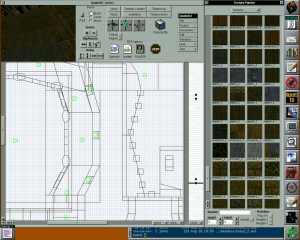 QuakeEd running on a NeXTSTEP workstation

QuakeEd is the original Quake level editor used by id Software to create the levels for Quake. It was developed in Objective-C for the (at the time) powerful NeXTSTEP workstation computers that id were using to build and compile the levels with. The code for QuakeEd was released shortly after the release of the game, but could not be compiled and used directly because players were highly unlikely to possess a NeXT workstation. However, the release of the code almost certainly helped the development of other early Quake editors, such as Thred, Qoole, BSP and Worldcraft.