Nehahra, is a large Quake mod, which was released along side a 3 hour and 55 minute companion Machinima film, The Seal of Nehahra. It's website is now dead, but is archived here. 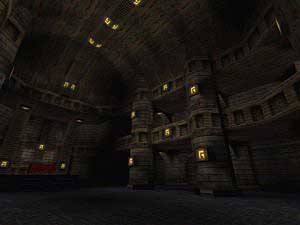 Your Last Cup of Sorrow, by Bal

Released in August 2000, the Nehahra project was led by Mindcrime, who recruited several of the best level designers in the community at the time, such as ELEK, czg, Bal, Vondur, Damaul, and Vigil. Also along for the ride was famed Quake engine coder LordHavoc. Nehahra was a 2 episode mission which continued the story of Quake, with new enemies, weapons, and pickups. Several technical enhancements were included as well, supported by a new Quake engine, such as improved AI, colored lighting, fog, and skyboxes. 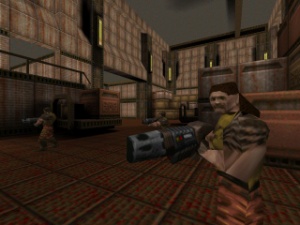 Also released in August 2000, a week before the mod, The Seal of Nehahra was a 4 hour in-engine film that greatly expanded on the backstory of Quake, fleshes out the details of what happened during the game, and leads into the Nehahra mod's storyline. Most of the story concerns Max, but also presents the wisecracking Phil as the unlikely hero of Quake, and Jack Torres, the hero of the Nehahra mod. At the time of it's release, The Seal of Nehahra was the longest Machinima film, a title it held for several years. Mindcrime was nearly solely responsible for everything in the film, from animation to models to voice acting, with the mod level designers pitching in sets.